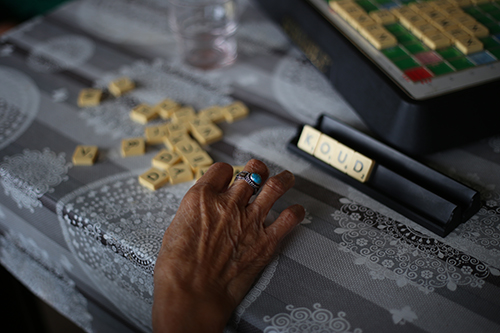 "A resident of the nursing home is playing scrabble and writes 'cold' (koud)". Foto: Alida Szàbo

Across the Netherlands, specialized nursing homes with Indonesian names such as Rumah Saya (lit. ‘my home’) or Nusantara (lit. ‘archipelago’) celebrate Indisch heritage. The existence of such homes has been affected both by the fact that institutional eldercare has been increasingly medicalized under the pressure of recent austerity measures, and by the fact that the supposed ‘failure of multiculturalism’ (Duyvendak 2020) has legitimized cutting public funding for minorities.

While Indisch nursing homes provide what has now come to be known as ‘culturally specific’ eldercare, most of them have been established, catering for a specific group of people marked as culturally different in the 1950s, long before a public debate about care for ageing migrant developed in the Netherlands (and elsewhere in Europe). The genealogy of these nursing homes is tightly linked to the history of decolonization of Indonesia, and the so-called “repatriation” of hundreds of thousands of Indisch Dutch citizens to the Netherlands between 1945 and 1965. Born in the former Dutch East Indies and often of ‘mixed’, Indo-European descent, the Indisch are the largest group of ‘migrants’ ever to have settled in the Netherlands – but theirs is a colonially inflected history. The first generations of Indisch that still have some memory of Dutch colonial society and were ‘repatriated’ to the Netherlands upon Indonesian independence are now reaching the end of life, thereby symbolizing the irrevocable loss of the former empire.

By zooming in on Indisch eldercare, this research explores the ways in which personal memory loss related to ageing is tied up not only with ideas about the loss of self (Lambek & Antze, 1996), but also with collective negotiations over the colonial past and questions of belonging in the postcolonial present (Carsten, 2007). Investigating the ongoing colonial presence in people’s bodies and minds, in the material site of the Indisch nursing home and Dutch society at large, ultimately, the project deals with the question of “how colonial histories matter in Europe today” (Stoler, 2016).