Climate change has been accepted as a serious global issue in the agenda of many countries, but how it affects different parts of the world varies. In a 2021 report by German Watch, most countries with the highest climate risk index are in South/Southeast Asia and Africa (Eckstein, et al., 2021). While Switzerland is listed among countries less affected by extreme weather events, it is clearly affected by rising temperatures—most visibly in the melting of glaciers. As a Vietnamese master’s student with an interest in environmental issues, climate change and sustainability, Linh Luu compares how Swiss and Vietnamese youth engage in climate response and action based on her observations during her work placement at the University of Zurich Department of Social Anthropology and Cultural Studies (ISEK) in the spring semester of 2021. 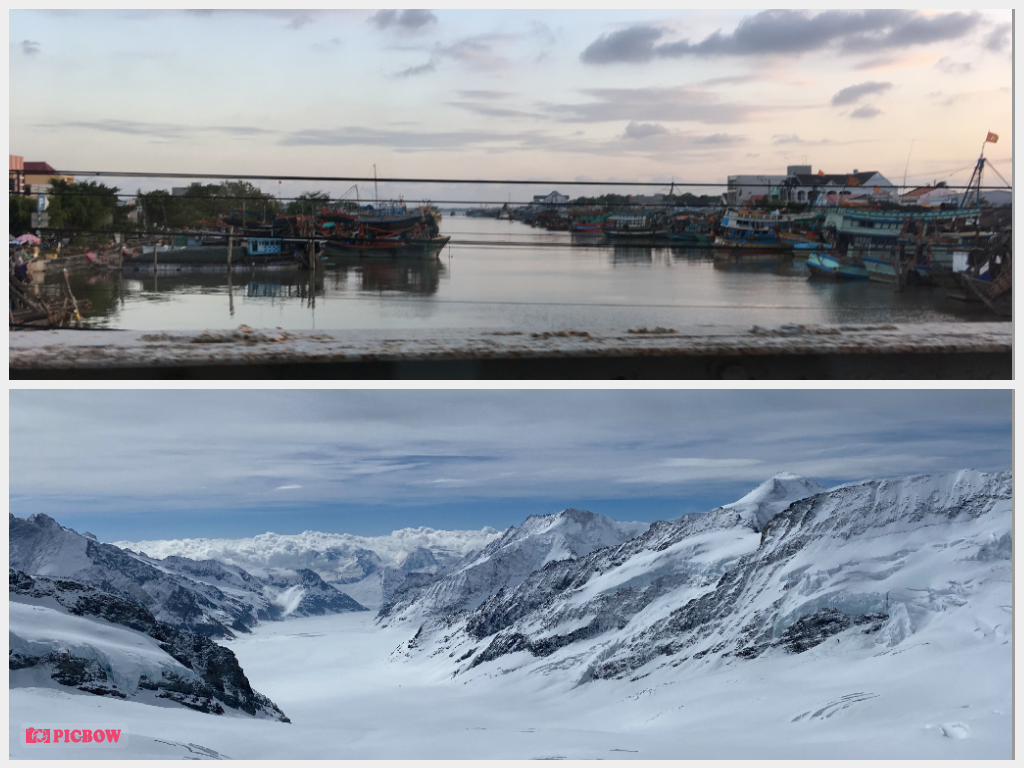 A scene of the Mekong Delta in Vietnam and Alpine mountains in Switzerland.

During my stay in Zurich, I lived in a student house near the main campuses of the University of Zurich and ETH Zurich. This accomodation houses Swiss and international students, most under 25 years old, who each have a small bedroom and share other facilities such as the kitchen, living room and terrace. It was from here that I gained insight into student life in Switzerland, from the perspective of both internationals and Swiss students, together with other interesting topics such as Swiss culture, society and politics. At the same time, as a student with a background in social sciences doing an internship at ISEK, I oftentimes found myself making observations and reflecting on the similarities and differences between the lives and concerns of young people in Switzerland and in Vietnam. One of the issues I found most intriguing was the ways in which they perceive and respond to the global issue of climate change.

The topic of climate change and climate action caught my attention because of the CO2 Gesetz (CO2 Act) referendum that was held during my stay in Zurich. As a response to the Paris Agreement, which aims to limit the global warming to below 2, preferably 1.5 degrees Celcius, the Federal Council of Switzerland set a long-term strategy for the country to be carbon neutral by the year 2050. In order to reach this goal, a revision of the CO2 Act was seen as essential for Switzerland to be on the right track towards the net-zero goal. In this federalist country with a unique direct democracy, most laws passed by the parliament can come into force without the people having to vote on them, but opponents can call for a vote (referendum) where the passing of the law would only come through with a majority of the population voting yes. On 13 June 2021, a slight majority rejected the revision of the CO2 Act. 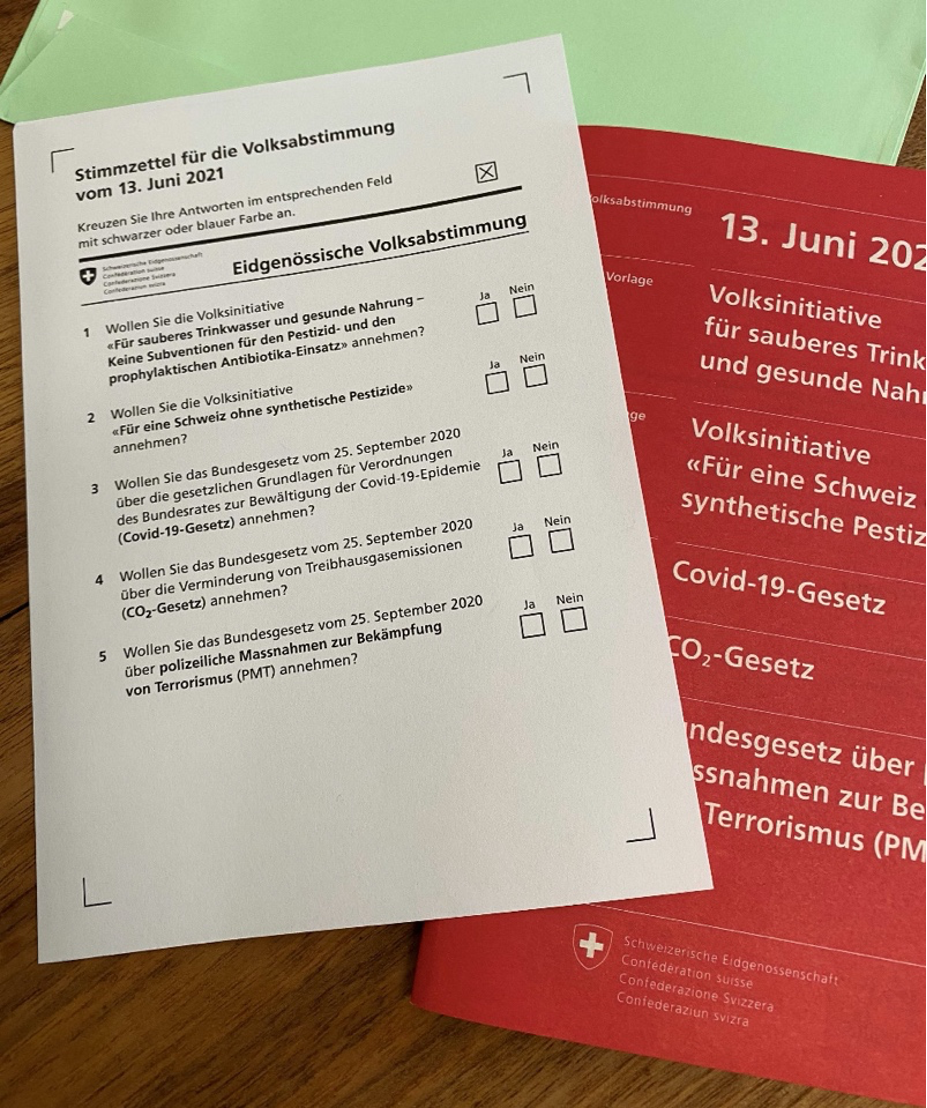 Intrigued by the politics of climate action, I started asking my Swiss housemates about the referendum and their views on climate change. While by no means representative of the student population in Zurich, let alone Swiss youth at large, I found some interesting contrasts between the ways in which my Swiss and my Vietnamese friends perceive the role of their respective countries in climate action. For example Leila[1], a student majoring in biology at the University of Zurich, thought that climate change and its effects are not as strongly felt in Switzerland as in other countries, but that it does exist and is intensified by human activities. That being said, she thought the country was doing well in terms of climate- and eco-friendly action, thanks to the high level of people’s awareness and the financial situation of the country itself. She considered the CO2 Act to be able to create a powerful effect on the climate situation not only in Swizerland but also to influence other countries by using money as a big driving force. Hence, not only did she vote yes, she also found that a large number of young people around her supports the initative. Although not being particularly associated with any climate change movements, Leila found herself engaged in a climate-friendly lifestyle of her own definition by biking and consuming less meat and products with a big CO2 footprint. In her opinion, youth, as the main working force and decision makers in the future, can have an impact on the climate; therefore it is important that they keep themselves informed and raise their voices by voting in referendums like this one. But for now, the responsibility and real influence is in the hand of people in more influential positions and politicians.

Law major Jaina mainly perceives climate change in Switzerland through weather such as heatwaves in summer, unfrequent snow in April, or a shorter skiing season. Although she thought the CO2 Act was controversial and a big compromise between those who wanted to do something against climate change right away and those who wanted to push for stronger solutions with a new law, she was going to vote yes. On a personal scale, Jaina was following a ‘more or less’ sustainable lifestyle by limiting clothes shopping and food waste and avoiding air travel. Jaina also took part in climate strikes, including one in May 2021, and was a student legal consultant for the climate movement organization Extinction Rebellion. Other ways that youths in Switzerland could be involved in climate action, according to her, were either to be engaged by running for political positions for young people, take part in debates at parties, or take part in sustainability week and other sustainability movements to promote a sustainable lifestyle at universities. However, she considered a bottleneck that prevented politically active youths to be that their opinions about climate change are not taken seriously and are considered idealistic. Despite her participation and understanding, Jaina expressed doubts about how activism with youth participation like climate strikes or political debates could make a profound difference other than raise public awareness and draw politicians’ attention to climate issues.

Eva, an anthropology student, also experienced climate change in Switzerland through unfrequent extreme weather events and temperature fluctuation. Like Leila, she found the country not as much affected by climate change as other countries like Vietnam, especially in urban areas. However, she emphasized the importance of Switzerland’s taking action by passing the CO2 Act as a responsibility to tackle inequality as a result of developed countries’ carbon emission. As she emphasized, ‘every country counts’. Although she is not involved in climate activism and feels uncertain about how it helps to improve the climate in a concrete way, Eva showed optimism about young Swiss participation in terms of encouraging and expanding climate action to a larger audience among the public. 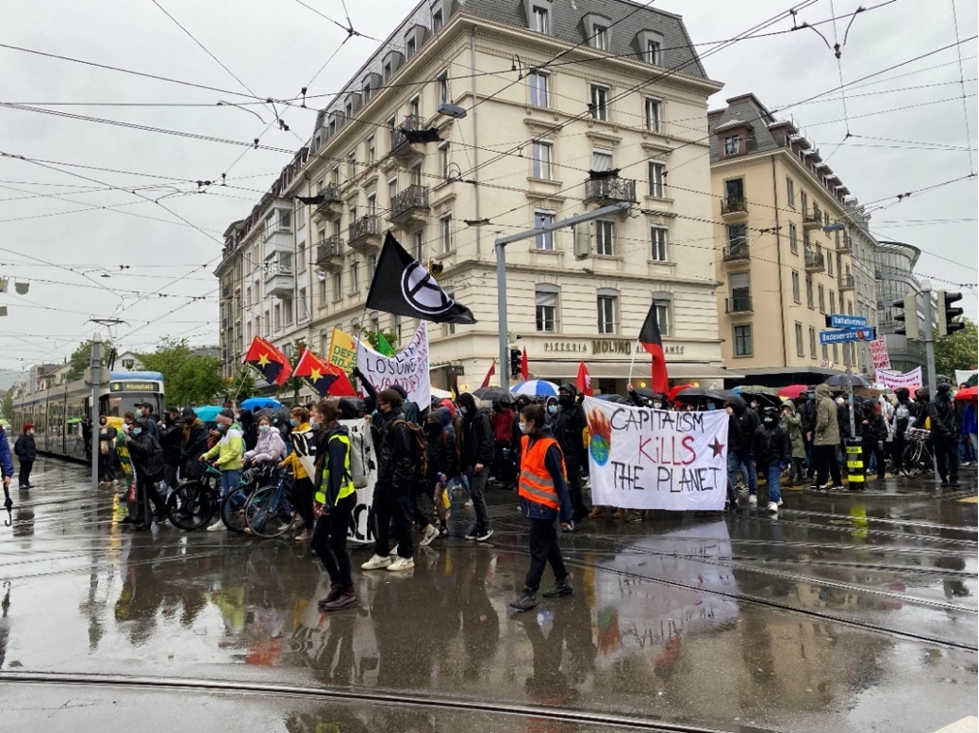 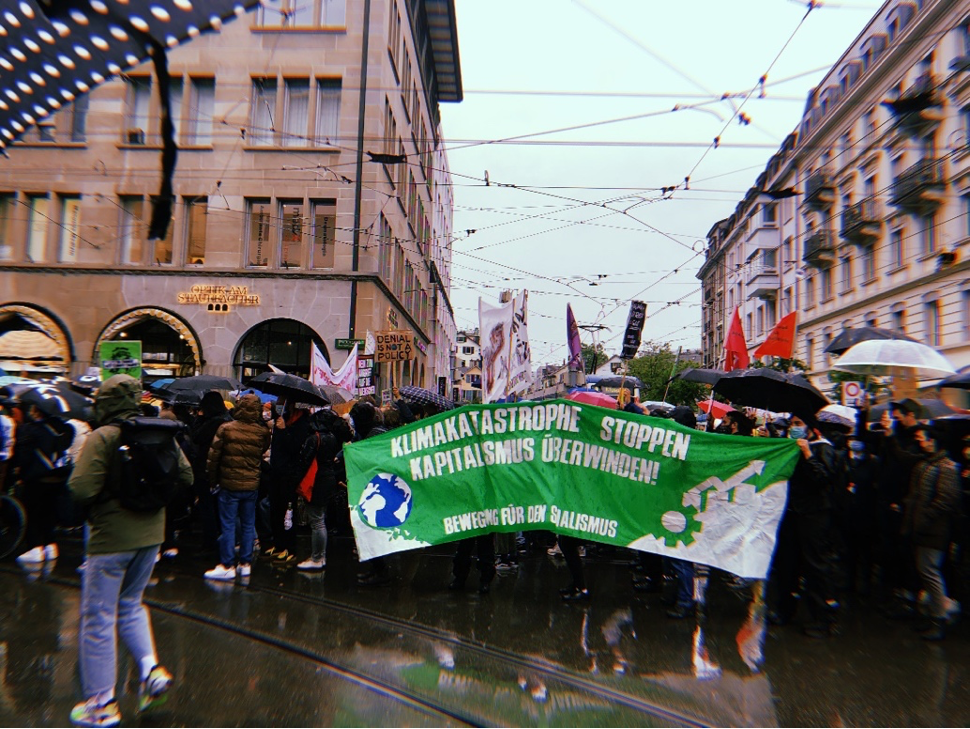 Climate strike on 21 May 2021 in Berninaplatz, Zurich.

Vietnam is often named to be among the countries most affected by climate change, with extreme weather events, floods, and sea level rise posing a real risk for livelihoods and ecosystems. Being aware of the socio-economic consequences of climate change, the government has adopted a range of national climate change strategies, action plans and adaptation measures. There exist, however, major bottlenecks in the dissemination and implementation of these policies and measures. A recent study by the UNDP found that 60% of Vietnamese youth consider sources on climate policy to be difficult to understand, unreliable, or both. That does not, however, mean that young people do not engage in climate action.

Thi, for example, is the head of the event board of 350, a student-run organization that dates to 2009 and focuses on environment conservation at a university in Hanoi. Now in her second year, Thi joined 350 as a freshman since she wanted to contribute to the conservation of the environment. To her, climate change is a global and urgent issue taking place in various forms and mainly caused by a lack of awareness. She believed in the importance of awareness about forming the right behavior of youth towards the environment in the future, and that by organizing small-scale awareness activities such as information workshops or exchanging waste for plants, her organization would contribute to the long-term goal of raising people’s awareness towards environmental conservation. 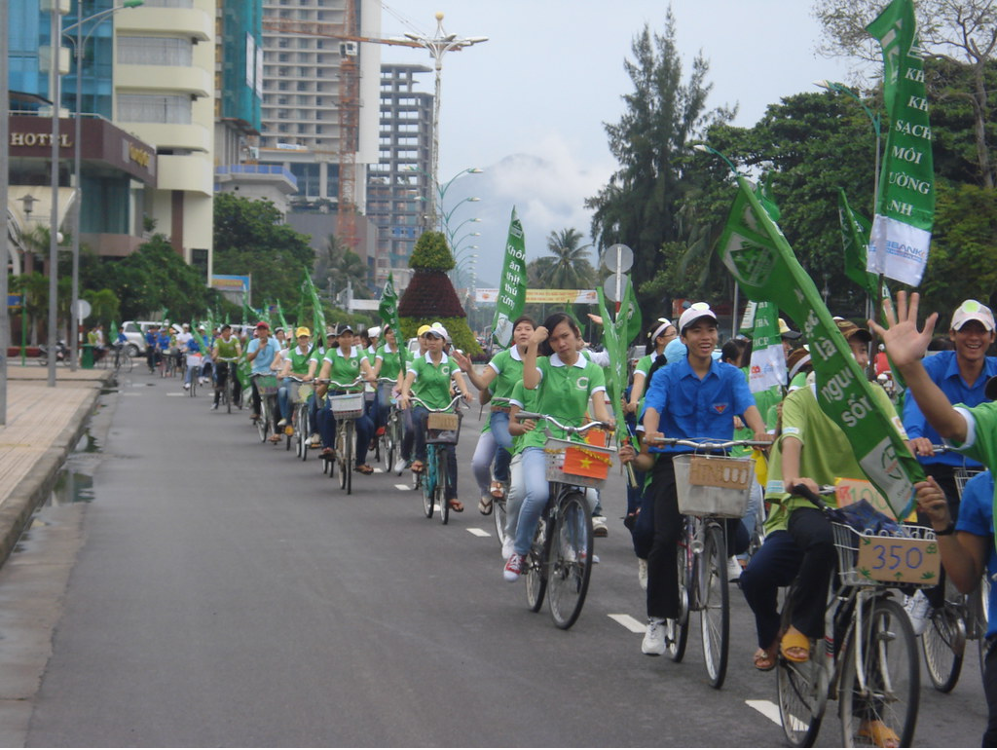 While he is not involved in any climate or environmental organizations, Hiếu, a student majoring in tourism management, did state that he thought that climate change is a serious issue across the world and in Vietnam, and that the problem has increased over the years. To him, climate action takes the form of using public transport and making sure he sorts out the trash according to the recycle categories. He highly values the role of young people in the fight against climate change, as this group ‘only takes up 35% of the population but is 100% the future of the world’. Therefore, he thought Vietnamese youth participation in climate action such as peaceful protest or taking part in nature conservation activities is important to highlight the youth’s stance on the climate to authorities.

This is exactly what Thanh seeks to do. She is one of the founders of Trạm Eco, a youth environmental organization based in Da Nang that aims to spread the green lifestyle among youth by organizing activities related to the environment and sustainable development. Newly founded just before COVID-19, the station had hosted talk shows on waste at local and national levels and organized clean up events with the participation of hundreds of people from different age groups. In Thanh’s opinion, young Vietnamese people nowadays have a relatively high level of awareness when it comes to environmental issues in general and climate change specifically. However, there are surrounding factors impeding young people to act accordingly, namely the education system, lack of information and the growing of consumerism in society. 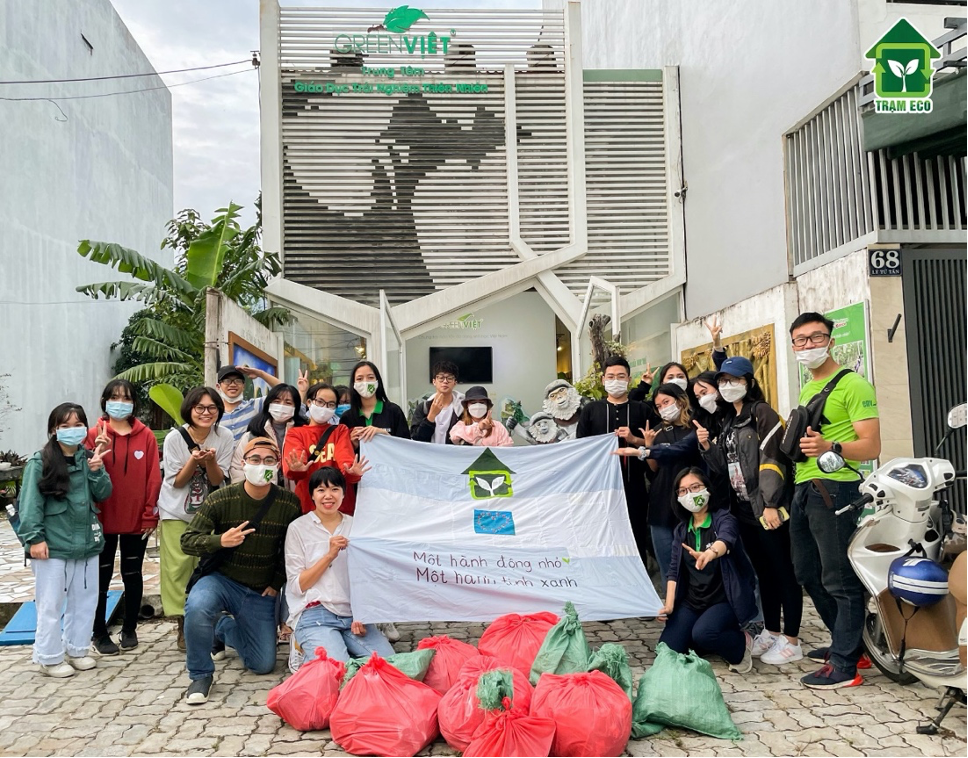 An event organized by Trạm Eco with a workshop on recycling and clean up activity.[3]

Climate change, as Prime Minister Pham Minh Chính stated in his address at the 26th UN Climate Change Conference of the Parties (COP26) in Glasgow in October 2021, ‘represents the greatest challenge of our time, and is shaping the future of mankind’ (Nguyen Minh 2021). While this is what most world leaders by now agree upon, the impact and politics of climate change vary considerably across the world. Yet, as my exchanges with students in both Switzerland and Vietnam show, climate action should not be reduced to climate policies. In raising awareness and changing behavior, young people in both countries seek to express their attentiveness to an issue whose impact is beyond the border of their own country.

[1] The names of respondents have been changed.