In the summer of 2017, Ana Scheu joined a four-week field school to Uganda. The field school was organised in collaboration with the Makerere University in Kampala, and was one of the many excursions that the Department of Social Anthropology (ISEK) at the University of Zurich offers on a regular basis. Such excursions are a unique opportunity for students to discover ethnographic methods by conducting their own research. The field school in which Ana participated centred on the topic „Disability and Technology in Uganda”. After choosing to focus on the experiences of people with albinism, Ana Scheu decided that she wanted to work with the method of film.

In her ZANTHRO comment, she talks about the process of making an ethnographic film on albinism in Uganda, the screening of the film, and the impact the film had. This comment accompanies the ZANTHRO working paper series n° 11, in which three other students that participated in the same field school present their reflections on the process of conducting fieldwork.

“I’m fully aware that I’m living with albinism – and I love it! I love the colour of my skin, I love the fact that I don’t have to demand for attention. I just stand there, and they’re like: He’s there (laughs).”

Martin grew up in Uganda, close to the capital city Kampala. He is one of the participants in the film Ndi Mulungi Mu Langi Yonna – I’m Beautiful in Every Shade that resulted from my two months of fieldwork in the summer of 2017 for (and beyond) the field school Disability and Technology.[1]

In Uganda, people with albinism attract attention wherever they go. Not only do they live with constant stares, they also often experience stigmatization. The film Ndi Mulungi Mu Langi Yonna – I’m Beautiful in Every Shade, 2018 aims to show the different experiences of four people living with albinism in Kampala and their strategies of dealing with “otherness” at a time where misconceptions and beauty ideals are challenged and are changing rapidly.

In 2009, the popular Ugandan artist Maurice Kirya released a music video called Boda Boda, 2009, with the chorus “Boda Boda (Motorcycle taxi), hurry up, hurry up, I need my baby” and close-up shots of the woman he is singing to: a person with albinism. This stands in contrast with shocking news headlines from Tanzania, as for example the article published by the tabloid MailOnline with a headline that the albinism community lives “in fear of being hunted down and hacked to pieces for their body parts” (Charlton 2016). Around the time the music video was released, news from the situation in Tanzania had spread in Uganda and provoked responses from activists tackling stigmatization. This sparked my interest in conducting research on how popular culture and beauty practices like makeup or hairstyling shape the self-perception of people with albinism. I also looked at how cultural imperialism within the discourse of beauty, where white (of European descent) ideals dominate, affects their self-perception.

The four participants of the film, Sarah, Madina, Phyllis and Martin, have albinism and all live in the urban environment of Kampala. Each of them had distinctly different experiences with having albinism. Phyllis grew up in an educated family and decided that having albinism should not influence her life in any way. She auditioned to be a model and participated in Kirya’s music video, which changed the lives of many people with albinism by portraying her positively and as desirable. Sarah experienced a lot of stigma as a child. She gained self-confidence after discovering beauty products, which enabled her to play with and benefit from the fact that she looked like a white or a mixed-race person. Now she is an activist in the field of disability and works for the National Union of Disabled Persons of Uganda (NUDIPU). Madina grew up in the slums as the only person with albinism in the area. Being around people with little access to education, she grew up not really knowing what caused her white skin colour. The biological explanation of albinism and the new visibility of people with albinism in popular culture gave her confidence. Martin walked the runway at the Kampala fashion week in 2015 (Oluka 2015). He learned to be confident early on in his life and chose to make albinism his trademark, with a lot of humour and understanding for people who do not know much about albinism. Each one of them found their own way to gain confidence and reconcile what they experienced.

Even though popular culture and activism have had a considerable influence on self-perception and on knowledge about people with albinism in Kampala, misconceptions still persist in society. Therefore, the participants and I decided to organize screenings followed by question and answer (Q&A) sessions in order to sensitize people to the topic, in both rural and urban parts of Uganda. For this purpose, film proved to be a useful medium since it transports a part of people’s living experiences in a very accessible way.

The finished film was presented several times in Kampala, Iganga and a small village in Kaliro district. Many people with albinism attended public screenings; one time about ten children with albinism were present. This was quite moving for Madina, since she had often felt alone as a child because she looked different. Beyond that, the participation in the screenings also confirmed that there is a growing interest in the topic and a growing number of activists in the field of albinism, not only in urban but also in rural parts of Uganda.

The first screening took place in the capital in February 2019, with Madina, Martin and Sarah in attendance. Several other albinism activists were present, as it is a growing and very active community – Madina now works as an advocate for people with albinism in a Christian organization. The screening was followed by an extensive Q&A. The audience’s reaction towards the protagonists was enthusiastic and affirmative, and their interest in four participants’ personal lives was remarkable. Though a lot of people were familiar with the topic, one question stood out, as it showed that a lack of knowledge exists even in the capital: what kind of food do people with albinism eat. Madina, the youngest, immediately answered, saying that everyone should by now have learned that people with albinism are humans just like everyone else, apart from their lack of melanin. Another person commented that he was thankful for learning that persons with albinism do not have special powers. 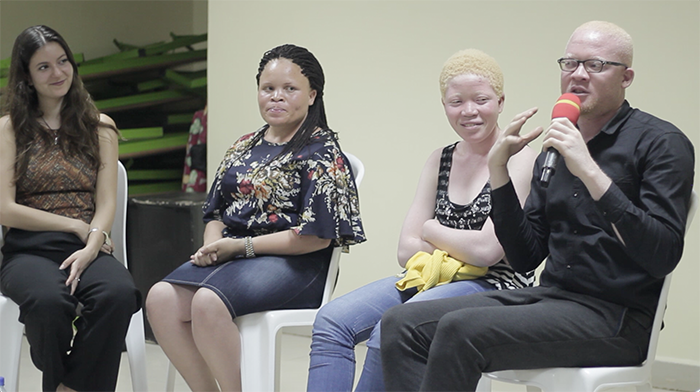 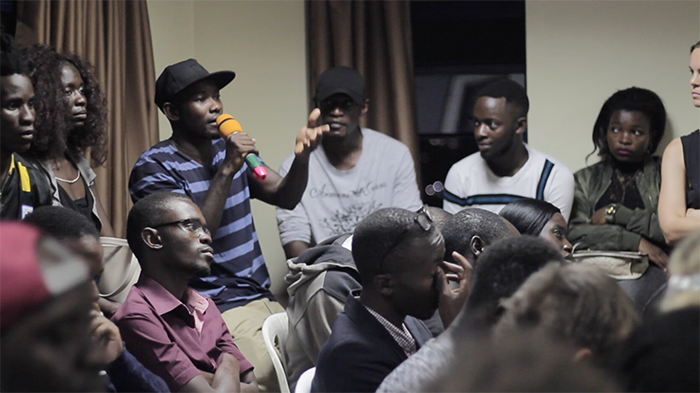 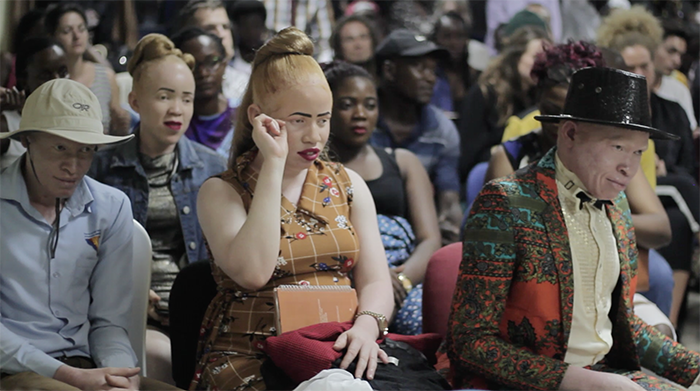 Audience at the screening at the Goethe Zentrum, Kampala, Uganda.

After this first screening we were invited by law students from Uganda Christian University to screen the film. They were planning to advocate for people with albinism in parliament. In September 2019, we screened the film seven more times. Three of those screenings took place in more rural areas in eastern Uganda; four were held at primary or secondary schools. 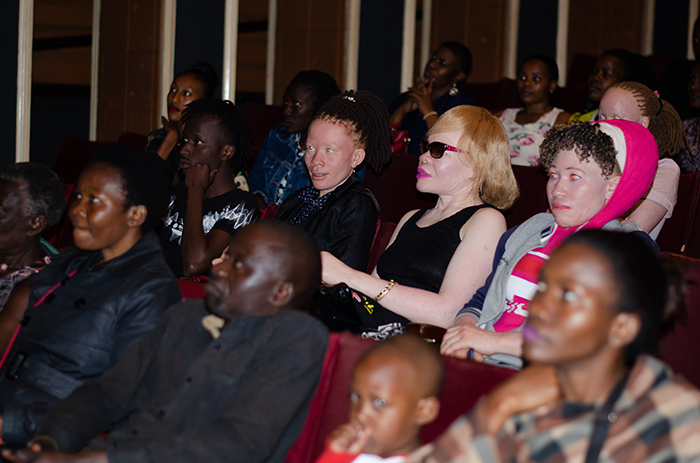 Audience at the last screening of the tour at the National Theater of Uganda in September 2019. 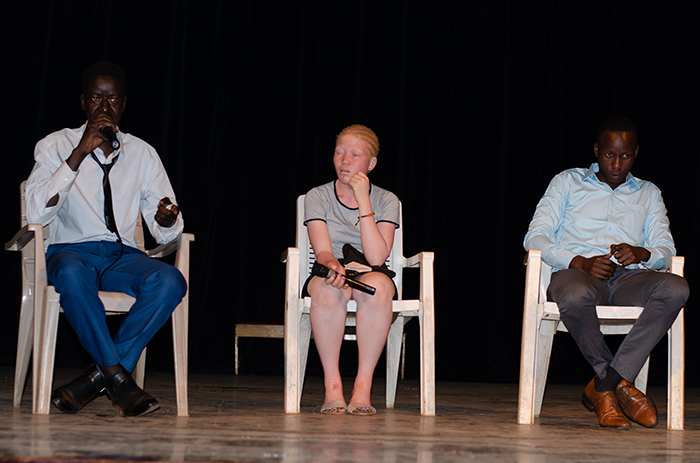 Podium discussion at the National Theater of Uganda with the participants Martin (not in the photograph) and Madina (middle), the founder of Pat's Journal: The Albinism News Network Pat Robert Larubi (left) and Janan Enachu (right) from the British Council.

In schools, teachers took the opportunity to explain or revise lessons on genetics and albinism. The youngest of the participants, Madina, joined the tour and really grew into the role of an advocate. She patiently answered questions like “what happens to your skin when you bathe?”, “would your children have albinism?”, or, more personal, “do you like to sing or dance?” 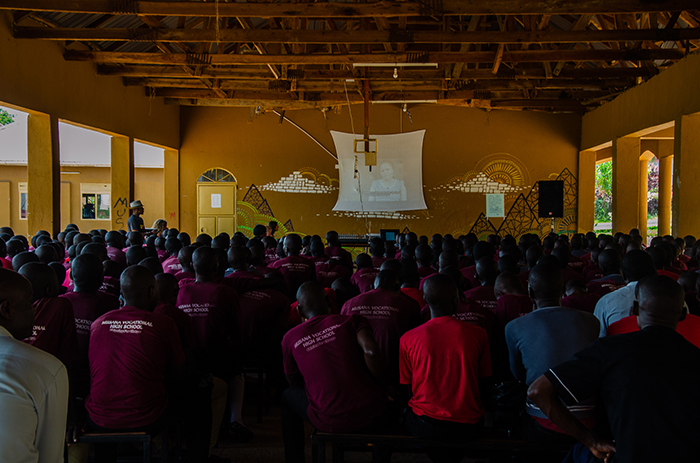 Screening in front of 400 pupils at Musana Secondary School, with Madina and the filmmaker. 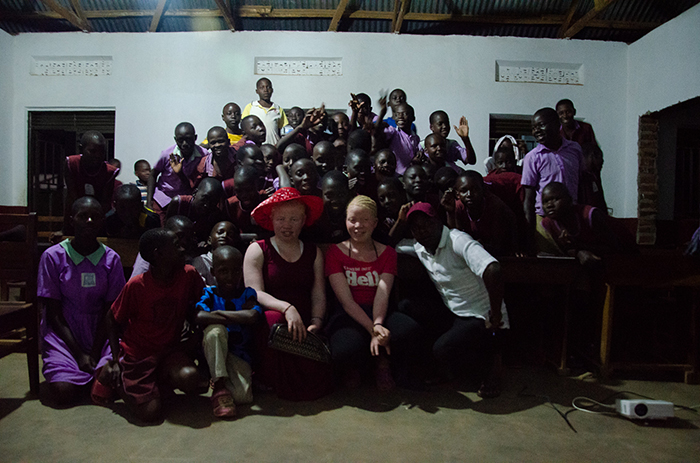 Screening and Q&A with Madina and the filmmaker at the primary school in Kaliro district. 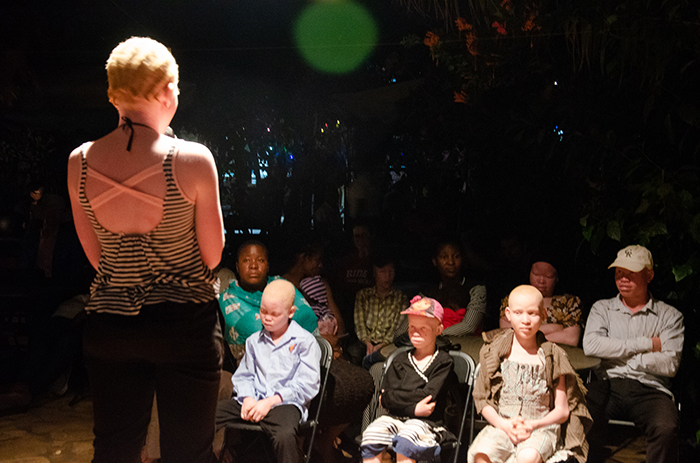 Madina’s visit to the primary school in the slum where she lives was moving for both of us. All the children knew who she was, yet many of them did not know what having albinism entails and what it does not. It was one of the last screenings, so by then Madina had become confident in her answers and explanations. She had only received positive reactions and lots of admiration on the tour so far. To then go into her neighbourhood and to be able to explain what it means to lack melanin to children who live close to her felt very empowering, as she mentioned to me later on. Until then, she had rarely spoken to people around her about having albinism – now she was actively explaining what it meant and what she had experienced because of it, and she knew they would probably tell others in her neighbourhood as well. 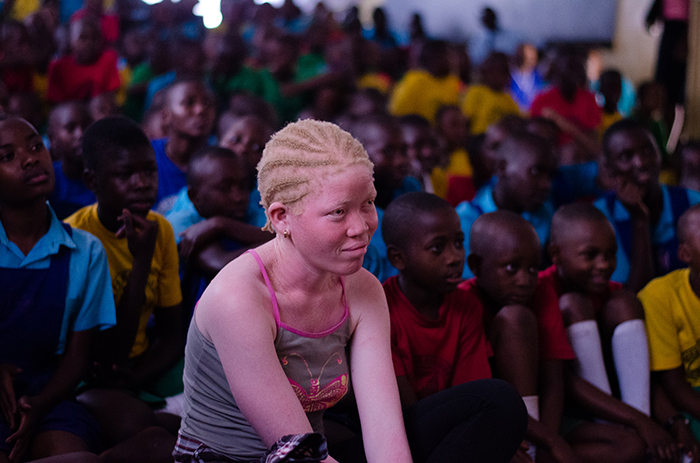 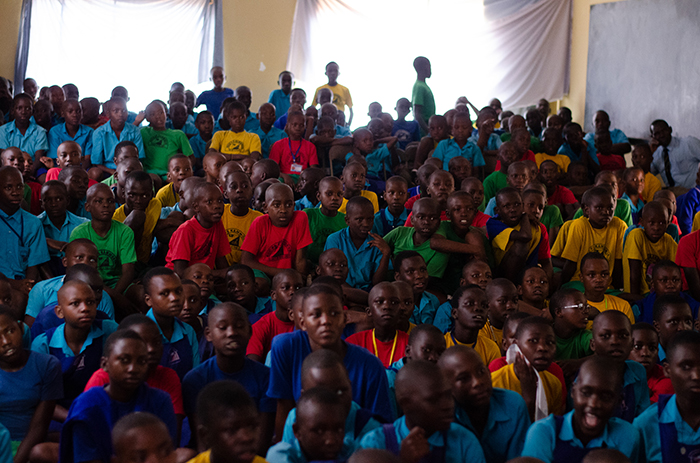 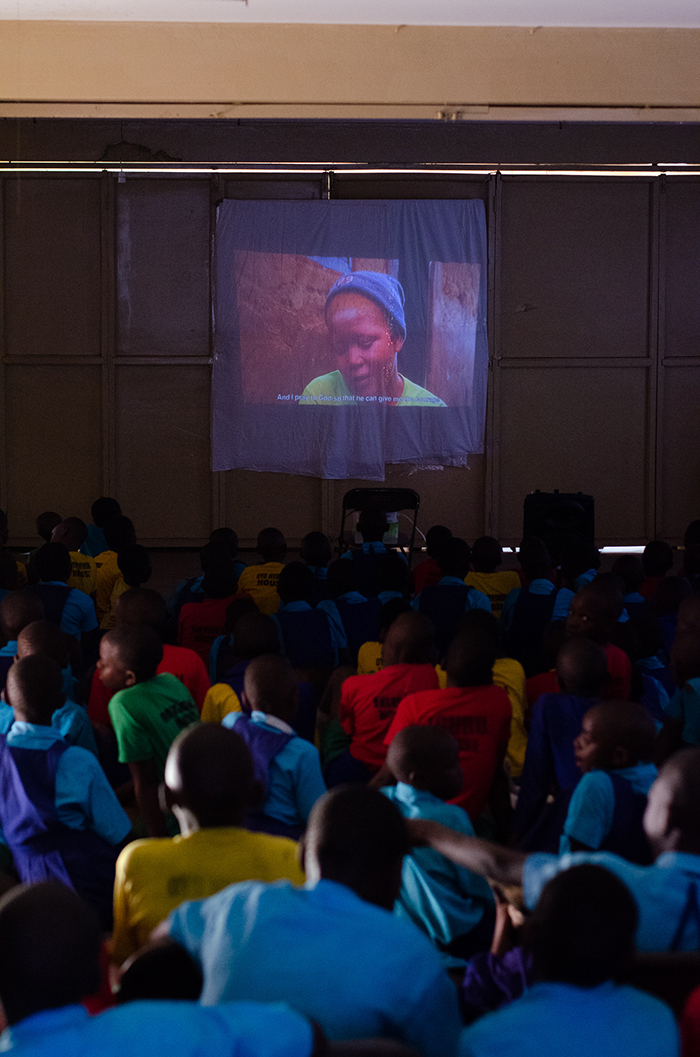 Madina speaks in front of 300 pupils of KCCA Kamwokya Primary school, in the slum in which Madina grew up.

The film aimed at portraying a changing narrative regarding people with albinism. It was moving to see how, through the screenings and Q&As, it also contributed to that changing narrative, and how the film in the end became one way for the participants to transport their message.